The Centre for Science and Policy’s 2013 annual conference, held on 18 April at the Royal Society in London, brought together some of the country’s most eminent professionals working at the intersection of science and policy.

View a snapshot of the day here:

The keynote address at the conference was given by UK Government Chief Scientific Adviser, Sir Mark Walport – his first major public speech since taking office on 1 April 2013.

To view the talks, see here:

Launch of the Future Directions collection of essays 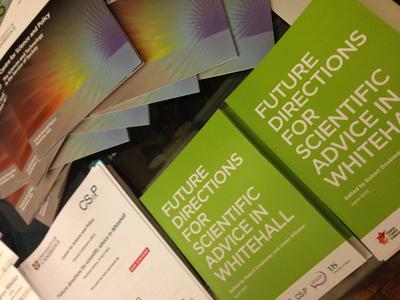 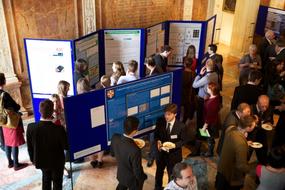 topics with potential implications for policy making. PhD student, Nick Jones (Centre for Diet and Activity Research, University of Cambridge) was the winner of the competition, presenting a poster of his research on the affordability of a healthy diet.

Led by CSaP Fellows, this session offered delegates a choice of attending one of three seminars on lessons drawn from recent examples of working in partnership with academic experts to tackle policy problems.

Seminar 2: Improving the relationship between national security challenges and research

Listen to the panel discussion here:

The conference concluded with a keynote speech by Sir Bob Kerslake, Head of the Home Civil Service.

CSaP Associate Fellow, Sir Bob Kerslake, recognised the vital role intermediary organisations such as CSaP have to play in helping ensure knowledge exchange between the worlds of academia and government.

In his welcome address, Robert Doubleday announced CSaP's participation in research programmes that have collectively raised over £10m in funding over the past twelve months.

During the week of the conference, CSaP welcomed its 100th Policy Fellow since the first cohort began their Fellowships in 2010. Nominated from industry, government and civil society, CSaP Policy Fellows begin their two-year Fellowships with an initial five days at the University of Cambridge, meeting as many as 30 senior researchers. The schedule of meetings is designed by CSaP to address each Fellow’s particular set of professional challenges.

Over 230 professionals from industry, academia and government attended the annual conference 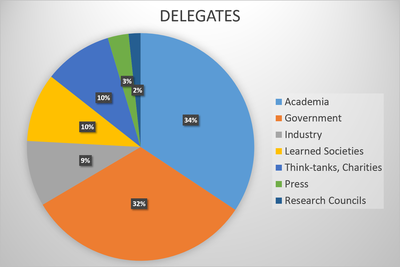 Debate throughout the day was lively, with over 80 mentions of #CSaP13 on Twitter… 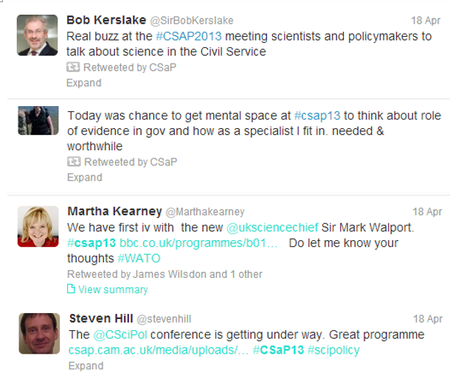 See a summary of the conference on Storify: http://bit.ly/11qmyYh

View coverage of Sir Mark’s presentation, and the launch of the collection of essays, in the Telegraph, Science and Times Higher Education

The Centre for Science and Policy’s annual conference was sponsored by the following organisations: