Enterprise and Business Relations at Pro-Vice-Chancellors' Office, University of Cambridge 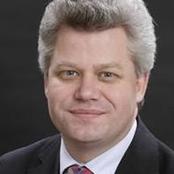 Professor Andy Neely is Pro-Vice-Chancellor for Enterprise and Business Relations, and the Founding Director of the Cambridge Service Alliance and the Royal Academy of Engineering Professor of Complex Services.

Andy is widely recognised for his work on the servitization of manufacturing, as well as his work on performance measurement and management. Previously he has held appointments at Cranfield University, London Business School, Cambridge University, where he was a Fellow of Churchill College, Nottingham University, where he completed his PhD, and British Aerospace. He was Deputy Director of AIM Research – the UK’s management research initiative – from 2003 until 2012 and was elected a Fellow of the Sunningdale Institute in 2005, a Fellow of the British Academy of Management in 2007, an Academician of the Academy of Social Sciences in 2008 and a Fellow of the European Operations Management Association in 2009.

Andy is also one of the world's leading authorities on organisational performance measurement and management. He has authored over 100 books and articles, including "Measuring Business Performance", published by the Economist and "The Performance Prism", published by the Financial Times. He has won numerous awards for his research and chairs the Performance Measurement Association, an international network for those interested in the performance measurement and management. Currently he is researching issues of performance and business model innovation in service businesses.