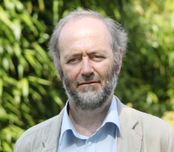 Simon Franklin came to Cambridge after an Oxford D.Phil. and a postdoctoral fellowship in Washington, D.C.. Most of his research has been concerned with the history and culture of early Rus and of Russia in the Early Modern period, though he has also published occasional studies of nineteenth- and twentieth-century Russian literature. In particular, he has focussed on aspects of the cultural significances of the written word across a broad spectrum of genres and forms and technologies: handwritten and printed, graffiti, inscribed objects, ephemera. Most recently he has been developing a holistic approach to the study of the ‘graphosphere’, the spaces of visible words.

Apart from teaching and research, he has served in numerous university and college roles, including periods as Head of the School of Arts and Humanities and as Senior Tutor of Clare College. He is currently a Trustee of the European University in St Petersburg, and of the Pushkin House Trust in London. In 2007 he was awarded the Lomonosov Gold Medal of the Russian Academy of Sciences, and he is a Fellow of the British Academy.