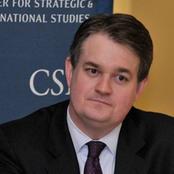 PhD Candidate, University of Cambridge and Formerly Co-Chair of the G8's Anti-Crime and Terrorism Group & US Deputy Assistant Secretary of State for International Crime

Schrage has taught Economics and National Security at the Georgetown School of Foreign Service, which was recently rated as the top global foreign policy masters program, and founded Delphi Strategy International LLC, a strategic advisory and consulting firm. His previous policy and political analysis experience includes serving as the Scholl Chair in International Business at the Center for Strategic and\\ International Studies (“CSIS” is a nonpartisan think tank whose bipartisan board includes former officials such as Henry Kissinger and Zbigniew Brzezinski) where he led work on the economic, political and security dynamics surrounding the global financial crisis. He also served as one of the youngest Deputy Assistant Secretaries under Secretary Colin Powell at the State Department, where he oversaw over a thousand personnel across the globe and more than $2 billion in some of America’s top priority global operations in the Middle East, Latin America and Afghanistan, including the training of civilian security and law enforcement to successfully secure that nation’s first democratic election. During this time, he was selected to serve a leadership role for all G8 countries as the international co-chair of the G8 Anti-Crime and Terrorism Group, where he launched G8 multilateral initiatives and conducted policy coordination in these priority areas following 9/11. His wide-ranging experience in Congressional roles also includes key positions for Senate Leadership, Armed Services and Homeland Security Committee Members and serving as international trade counsel for the Ways & Means Committee (the committee which initiates U.S. tax and trade laws) and as counsel for a Senate Foreign Relations Subcommittee responsible for U.S. policies on global terrorism and on Latin America.