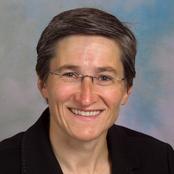 Clare Moriarty CB was Permanent secretary of DExEU from March 2019 until the Department's closure at the end of January 2020. Previously Clare was the Permanent Secretary of the Department for Environment Food and Rural Affairs in 2015. Before that she was Director General of Rail, in which role she was responsible for all rail-related activities undertaken by the Department for Transport. Her main areas of responsibility were:

Her previous role (from 2009) was as Director General, Corporate Group; following the 2010 General Election she led the Spending Review negotiations and restructuring of the central Department, and between January and March 2012 was Acting Permanent Secretary.

Clare’s early career was in policy roles in the Department of Health and the NHS, including three years as Principal Private Secretary to both Conservative and Labour Secretaries of State for Health. She piloted NHS Foundation Trust policy from legislation to implementation and developed a network leadership role for Portsmouth & South East Hampshire health and social care community. From 2005 to 2008 she was Constitution Director at the Ministry of Justice, with responsibility for information rights, human rights, electoral policy and the constitutional settlement.

Clare is board champion for gender at DfT and supports the development of women leaders across the civil service. She became a Companion of the Order of the Bath in the New Year Honours 2016, for services to transport.