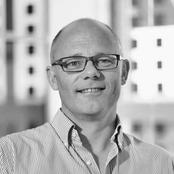 Glenn Woodcock has 25 years of experience as a banker and venture capitalist, including seven years as Group Head of Credit Risk Infrastructure and Regulatory Reporting, Royal Bank of Scotland (2001-08). Since 2008 he has been Director of Oxygen House (formerly Andromeda Capital). During this period he has held many other directorships, including TheraSim, Inc. (2010-14) and Kulu Valley (2009-14); from 2009-12 he was also a member of the Advisory Board at Chartis Research.

Over the last five years, Glenn's role has sat at the overlap between the public sector and the private. He built from scratch the UK’s most significant education tech company for enhancing maths outcomes at GCSE level (Sparx – http://www.sparx.co.uk/), and has recently moved to non-exec there become CEO of Exeter City Futures (www.exetercityfutures.com). He has publicly committed, with the politicians and executive of Exeter City Council, to make Exeter energy-independent and congestion-free in ten years’ time.