Professor of Physics at University of Sheffield 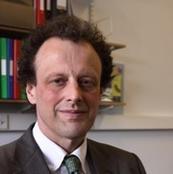 Professor of Physics, University of Sheffield

Richard is a physicist, with a BA and PhD from Cambridge University. Following postdoctoral work at Cornell University, he was an assistant lecturer, then lecturer, at Cambridge's Cavendish Laboratory. He moved to Sheffield as a Professor of Physics in 1998, and was Head of Department from 1999-2003. From 2009 to 2016 he was Pro-Vice Chancellor for Research and Innovation, with overall responsibility for all aspects of research, innovation and knowledge exchange across the University of Sheffield.

His work has focused on experimental studies of the nanoscale structure and properties of polymers and biological macromolecules at interfaces. He is the author of more than 120 research papers, and three books, the most recent of which is Soft Machines: nanotechnology and life, published by OUP in 2004. He was elected a Fellow of the Royal Society in 2006.