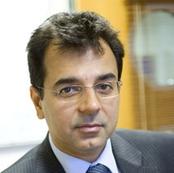 Since his recruitment from Oxford to Imperial in 2007, he founded and directs the Tuberculosis Research Unit, a world-leading multi-disciplinary research group that investigates a broad spectrum of fundamental questions in tuberculosis from immunology and microbiology to epidemiology, public health and policy. The Unit also has active research programmes investigating the sarcoidosis and pandemic influenza. Professor Lalvani qualified in medicine from the Universities of Oxford and London and trained in general internal medicine and infectious diseases in London, Cambridge, Oxford and Basel.

After his doctoral thesis as MRC Clinical Training Fellow at the Weatherall Institute of Molecular Medicine at Oxford he became Clinical Lecturer in the Nuffield Department of Medicine, John Radcliffe Hospital, Oxford and has been a Wellcome Senior Research Fellow and Consultant Physician since 2001. His research has shaped TB control policy internationally and provided fundamental insights into immunity to intracellular pathogens and the action of TB and malaria vaccines. The FDA-approved, NICE and CDC-endorsed interferon-gamma release assay (IGRA, ELISpot, T-SPOT.TB) which he invented and validated is the first advance in diagnosis of latent TB in 100-years and now forms the basis of new national guidelines for TB screening and prevention throughout the world. His ongoing research program probes the immunologic and genetic factors that shape the natural history and clinical outcomes of TB infection, whilst maintaining a strong translational theme by developing and validating novel biomarkers of infection, disease and treatment response.

He has raised over £12 million in competitive peer-reviewed research grants and published over 90 papers with over 4,000 citations in the world-wide scientific literature. Professor Lalvani has received several awards in recognition of his contribution to global tuberculosis control, including the Scientific Prize of the International Union against Tuberculosis and Lung Disease 2005 and the Royal College of Physicians Weber-Parkes Medal 2008. In 2009 he was appointed to the UK National Institute of Health Research College of Senior Investigators in recognition of his world-leading patient-focused research.