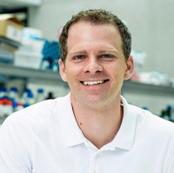 Dr Alexander Jones has long been fascinated by how plants change their physiology and development to suit dynamic environments without a centralised information processing system. In particular, he has spent his scientific career investigating how a suite of mobile small molecules, the phytohormones, serve as both signal-integrators and program activators in plants.

After undergraduate research on the phytohormone auxin (with Judy Callis, UC Davis), his PhD was focused on the role of the immune hormone salicylic acid (SA) in both root development and in crosstalk between host plants and a bacterial pathogen that synthesizes SA (with Mary Wildermuth, UC Berkeley). In one project, he developed a promoter-reporter line that is highly sensitive to SA and found evidence of a transient accumulation of SA in the Arabidopsis root tip. In conjunction with his investigations of the mechanism of root growth inhibition by SA, he hypothesized that root tip localized SA carries out an unknown function in root development. In a second project centred on the question of how the pathogen acquires iron from plants, he found that the bacterium has three high-affinity iron acquisition systems. Because a mutant lacking all three remained fully pathogenic, he hypothesized that, unlike many mammalian pathosystems, the pathogen’s environment is relatively iron replete. In both projects, progress on my new hypotheses stalled because he was unable directly quantify the levels of SA or iron with the necessary spatiotemporal resolution using available technologies.

These challenges inspired him to pursue enabling technologies during my postdoc with Wolf Frommer (Department of Plant Biology, Carnegie Institution for Science). He first developed a platform for accelerated engineering of FRET biosensors. Using this platform, he screened over 1,500 biosensor designs and succeeded in generating both an Abscisic Acid Concentration and Uptake Sensor (ABACUS) and Gibberellin Perception Sensor (GPS). A key early finding was determining, for the first time, cell-type and timing of specific ABA dynamics and GA distribution patterns in actively growing Arabidopsis roots.

Also during his postdoc, I led the completion and analysis of a large-scale protein interactome project (Associomics.org). During the network analysis, bioinformatics, and hypothesis testing phases of the project, the Associomics team in the Frommer lab and seven additional collaborating labs analysed the results of millions of protein-protein interaction tests. Many of the analyses and biological discoveries focused on hormone biology (e.g. hormone receptor trafficking, hormone transporter regulation, and hormone-related interaction networks). The resulting Membrane-based Interactome Network Database added greatly to our knowledge of individual protein-protein interactions and also the characteristics of interactome networks generally (Associomics.org).

His research group at the Sainsbury Laboratory, Cambridge University investigates how plant hormones serve as signal integrators and master regulators of physiology and development. In multicellular organisms, these functions are crucial for the coordination of the activities of individual cells – each having an independently tuneable hormone level and hormone response – into an ensemble behaviour appropriate for the organism as a whole. The recent advent of ABACUS and GPS biosensors permits analysis of ABA and GA levels with cellular resolution and we are now observing hormone patterns that were previously unknown. His group also continues to develop new technologies for high-resolution sensing and perturbation of plant hormones in vivo.