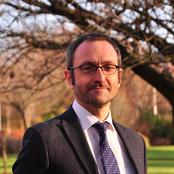 Andrew Slade joined the Welsh Government in 2012. He first worked on EU programmes, and then as Director, Agriculture, Food and Marine. He then became Lead Director for Environment and Rural Affairs, and Head of Policy Profession, before becoming Director General, Economy, Skills and Natural Resources in January 2018.

Before coming to Wales, Andrew worked for the UK Department for Environment, Food and Rural Affairs (Defra), where he led the setting up of the new national rural development service. Between 2006 and 2011 he worked in South West England; his roles included Deputy Regional Director at the Government Office responsible for sustainable development, and Executive Director of Programmes and Partnerships at the SW Regional Development Agency. His earlier career was with the Ministry of Agriculture, Fisheries and Food (which became Defra), including a spell as Principal Private Secretary to the Secretary of State.