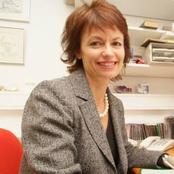 Professor Dame Anne Glover is an academic biologist. She was Professor of Molecular biology and Cell biology at the University of Aberdeen before being named Vice Principal for External Affairs and Dean for Europe. She also served as Chief Scientific Adviser to the President of the European Commission from 2012 to 2014. From 2006 to 2011, she was the Chief Scientific Adviser for Scotland.

Anne was recognised in March 2008 as a Woman of Outstanding Achievement in the UK and was awarded a CBE for services to Environmental Science in the Queen's New Year Honours List 2009. She was elevated to DBE (Dame Commander of the Order of the British Empire) in the 2015 Birthday Honours List.