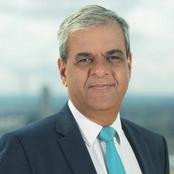 Ashok Vaswani joined Barclays in 2010, managing the credit card business across the UK, Europe and the Nordics, becoming chairman of Entercard. He went on to manage Barclays in Africa before taking on the role of CEO for UK Retail and Business Banking and then Personal and Corporate Banking.

Prior to Barclays, Ashok was a partner with a J P Morgan Chase funded private equity firm – Brysam Global Partners, which was focused on building retail financial service businesses in emerging markets. Ashok spent twenty years with Citigroup. His last position at Citigroup was CEO, Asia Pacific, Global Consumer Bank based out of Singapore. Ashok was also a member of the Citigroup Operating Committee, the Citigroup Management Committee, and the Global Consumer Planning Group. In addition, he served as a Director on the Board of Asia Pacific VISA International.

Over the last twenty years, Ashok has focused his career on Global Retail Banking demonstrating a passion for building businesses. He started his career in Mumbai, India with the launch of the Consumer Bank there. Since then, Ashok has worked and lived in Asia, Central Europe, Europe, the Middle East and the US. He was responsible for the start-up of many retail businesses as well as running large operations, such as CFO and CAO for Citi’s US Credit Card Operations and as CEO for Citi’s Asia Pacific Consumer Bank.

He was born in India, is married to Veena, with a grown up daughter who is working in New York. Ashok is on the advisory Board of S P Jain Institute of Management and has served on the Advisory Board of Insead, Singapore as well as being a Founder Director of Lend-a-Hand, a non-profit organisation focused on economic development in India.

Ashok also serves as Non-Executive Director on the Board of Telenor Group, and as Trustee for Citizens Advice.