Co-founder and CEO at The Crowdfunding Centre 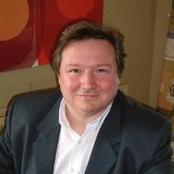 Co-founder and CEO, The Crowdfunding Centre

Barry James is the Co-founder and CEO of the Crowdfunding Centre, an organsiation which provides entrepreneurs, crowdfunders and other professionals with the tools and real-time maps we needed to understand and explore this nascent sector better.

Barry is a noted futurologist, technologist, writer and entrepreneur, who has become a leading champion and thought leader for crowdfunding & the crowd economy internationally. As well as the Crowdfunding Centre Barry has founded TheCrowdDataCenter.com & VentureFundingHubs.com, and he is lead author of the “The State of the Crowdfunding Nation” series.

He co-founded The Social Foundation in 2012 to further research, education and policy initiatives into the new, post-crash economy & Crowdonomics™ creating the UK's first national Crowdfunding conference, 'Deep Impact', leading to the formation of the influential Westminster Crowdfunding Forum and APPG which he helps lead. In 2010 he co-authored a pivotal report for the UK's Information Commissioner on information security in the UK SME sector.

An award winning innovator with technology patents granted in the UK, USA & internationally, he remains co-founder & CEO of AngelRevolutions, the cloud & mobile tech company. He is a frequent speaker and visiting lecturer on Crowdfunding entrepreneurship, innovation and an experienced conference chair, event creator and organiser.

Barry has a degree in Psychology & Mathematics from Lancaster University and his interest include disruption, the co-evolution of the Internet with society globally, citizen entrepreneurship and the rise a post-digital people-centred economy.