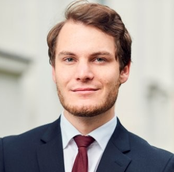 Benjamin Wannenwetsch heads up a team of five commercial diplomats across the British Consulate in Munich and the Embassy in Berlin.

His work focuses on the UK’s technology sector trade & investment strategy as well as the broader digital commercial bilateral relationship between Germany and the UK. He has previously worked in public sector strategy consulting and for an economic research institute.