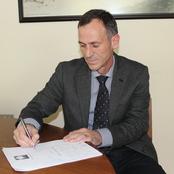 Besnik Osmani has started his professional career as teacher in the Secondary Middle School of Economy and has been involved in public life since '90s. As student of the Faculty of Economy of the University of Prishtina, he has been actively engaged in the nationwide movement for freedom and liberation of Kosova. He has carried out this activity for ten years through its active role as Vice-President of the Youth Forum of the Democratic League of Kosova.

In 1999, after the war in Kosova, he immediately got involved in the institutional life and has actively participated in many state-building processes in Kosova. In 1999, he has started to work in the Treasury of Kosova (Central Fiscal Authority). Following establishment of the Ministry of Finances he was elected Director of the Department of Central Administration, and then in 2004 Director of the Department of International Economic Cooperation.

In 2005, Mr. Besnik Osmani was nominated as Acting Permanent Secretary in the Ministry of Local Government Administration. As of 2006 he holds the position of the Secretary General in this ministry. During these years, Ms. Besnik Osmani has had an active role in building Kosova's institutions by holding managerial and coordination positions during many institutional processes.

In 2009, he was nominated the National Coordinator of Cross-Border Cooperation of Kosova with the neighbouring countries, while as of 2012 he leads the technical Group of the Association for the implementation of the First Agreement for the normalisation of relations between Kosova-Serbia facilitated by the European Union.

Moreover, he has been the member of the Board in the Publicly Owned Enterprise "Iber-Lepenc", for one mandate. During this time, the POE has been transformed into a market-oriented enterprise with a better financial balance in its new history.

He continues to play an important role in the European integration agenda, especially in the field of reintegration of repatriated persons and public administration reform.