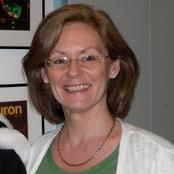 Professor Christine Holt FRS FMedSci is Professor of Developmental Neuroscience in the Department of Physiology, Development and Neuroscience at the University of Cambridge. Her research focuses on how nerve connections are first established in the brain. Specifically, her team is investigating how axons are guided to their correct synaptic targets in the brain. Her recent work has revealed that local mRNA-based mechanisms play a key role in establishing and maintaining neural circuitry and has an impact on understanding wiring disorders and neurodegenerative disease.