Head of Special Projects at The Wellcome Trust 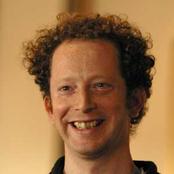 Dr Daniel Glaser's team directs activities with young people inside and outside school, considers education policy, engages with the broadcast media and examines interactions between scientists and non-scientists of all sorts.

His scientific background involves the use of fMRI (functional magnetic resonance imaging) to examine how experience, prejudice and expectation alter the way we see the world. He comes from an unusual academic background having studied maths and then English literature at Cambridge, doing a masters in cognitive science at Sussex University, and graduate work in neurobiology at the Weizmann Institute in Israel.

In 2002 he was appointed ‘Scientist in Residence’ at the Institute of Contemporary Arts (ICA) in London. This was the first appointment of its kind at an arts institution. In 2005 he was in the first cohort to receive a Cultural Leadership Award from the National Endowment for Science, Technology and the Arts (NESTA).

As well as presenting a television series for the BBC on how science really works, he has made numerous appearances on national and local radio and has featured in articles in daily newspapers. He co-chairs the Café Scientifique at the Photographers’ Gallery which is the London branch of a national series providing a new way for scientists to interact with a general public.