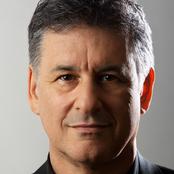 Daniel Levitin is an American cognitive psychologist, neuroscientist, and writer. He is James McGill Professor of psychology and behavioral neuroscience at McGill University in Montreal, Quebec, Canada, with additional appointments in music theory, computer science, and education; Director of the Laboratory for Music Perception, Cognition and Expertise at McGill, and Dean of Arts and Humanities at The Minerva Schools at KGI. He is also a record producer and musician. From September 2006 to April 2007 he served as a weekly commentator on the CBC Radio One show Freestyle, and he has appeared frequently on NPR.

Levitin is known for his scientific articles on absolute pitch, music cognition and neuroscience. He is the author of three books, This Is Your Brain On Music: The Science of a Human Obsession, (2006), The World in Six Songs: How the Musical Brain Created Human Nature (2008) and The Organized Mind: Thinking Straight in the Age of Information Overload (2014). He is a Fellow of the American Association for the Advancement of Science, the Association for Psychological Science and the Royal Society of Canada.

As a cognitive neuroscientist specialising in music perception and cognition, he is credited for fundamentally changing the way that scientists think about auditory memory, showing through the Levitin Effect, that long-term memory preserves many of the details of musical experience that previous theorists regarded as lost during the encoding process. He is also known for drawing attention to the role of cerebellum in music listening, including tracking the beat and distinguishing familiar from unfamiliar music.