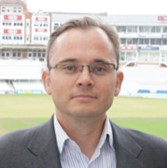 Dominic Lake is a senior civil servant at the Foreign, Commonwealth and Development Office.

In his previous role he was Ministry of Justice (MoJ) where he was responsible for human rights policy, devolution and the Crown Dependencies. He held this role from April 2017 to October 2021.

Prior to joining MoJ, Dominic was Deputy Director and Head of Arts, Libraries & Cultural Property at the Department for Culture, Media and Sport (DCMS). Here he was responsible for wide-ranging cultural policy and delivery of a number of key outcomes and projects. This included the publication of the 2016 Culture White Paper; setting up the Cultural Protection Fund; rolling out WiFi to all public libraries; and providing strategic oversight of the allocation of public funding to Arts Council England and the British Library – the largest of DCMS’s arms-length bodies.

Before this, Dominic was Head of Local Media in DCMS from 2009 to 2012. In this role he initially worked on nations and regions public service broadcasting issues as part of Digital Britain which included the design and procurement of regional broadcast news partnerships (known as independently funded news consortia (or IFNCs)); and then latterly, he led the hugely ambitious regulatory, spectrum and policy programme which established a brand new local television market for the first time across the UK.

Dominic spent the early part of his career working at the Office of the Rail Regulator on a range of areas including the regulation of post-privatisation railway access contracts; legislative and regulatory structural reform; and strategy and planning.

He graduated in 1996 with a BA (Hons) degree in History and American Studies from the University of Leeds. He is a school governor, and spends much of his spare time with his family participating in sporting and cultural activities.