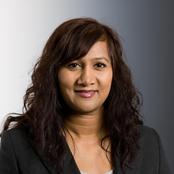 Selvarani joined LGC in 1991 after graduating from King’s College, London. Her career began as a Scientific Officer in the Food and Nutrition Group where she had responsibility for the determination of trace elements in foods.

In addition to current role as Business Manager for Food Research, Selvarani is the UK Deputy Government Chemist. She now has over 20 years experience in the analysis of food and agriculture samples for authenticity, contaminants, additives, composition and nutritional analysis.