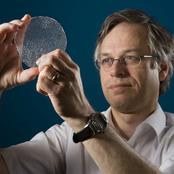 Eric Wolff is a Royal Society Research Professor in the Department of Earth Sciences at University of Cambridge. His research focuses on what ice cores from Greenland and Antarctica can tell us about climate change over the past 800,000 years. Ice core chemistry reveals information about past temperatures, the effect of volcanic eruptions and biomass burning, and greenhouse gas concentrations. Using these ice cores, Eric can draw conclusions about the mechanisms of climate change.