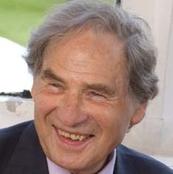 Until his death in August 2012, Sir Gabriel Horn FRS was Emeritus Professor of Zoology at the University of Cambridge, and both a pioneer in the study of the neurological basis of thought and a moving force behind the University’s engagement with public policy.

Professor Horn's first academic position was in 1956 at the Department of Anatomy, University of Cambridge as a Demonstrator in Anatomy. He became a Lecturer and then a Reader, before leaving tobecome Professor of Anatomy at the University of Bristol in 1974. In 1977, he returned to Cambridge to head the Department of Zoology, retiring in 1995. He was Master of Sidney Sussex College, Cambridge from 1992 to 1999 and Deputy Vice-Chancellor of the university from 1994 to 1997. He remained a fellow of Sidney Sussex College after 1999 until his death, and was a fellow of King's College, Cambridge, from 1962 to 1974 and from 1978 until 1992.

Professor Horn was elected a Fellow of the Royal Society in 1986, receiving their Royal Medal in 2001. He was awarded an Honorary Doctor of Science degree by the University of Birmingham in 1999 and by the University of Bristol in 2003. He was knighted in the 2002 New Year Honours for services to Neurobiology and to the Advancement of Scientific Research. In 2007 he was interviewed about his life and work by Sir Patrick Bateson - see here.

Professor Horn was one of the moving forces behind the Cambridge University Government Policy Programme (CUGPOP), the initiative which preceded the Centre for Science and Policy; his energy, enthusiasm, breadth of vision and attention to detail enabled the Programme to have a deep and lasting influence on government policy. CSaP has been built on the legacy of CUGPOP, and he continued to play an important role as a mentor with perceptive comments and suggestions.