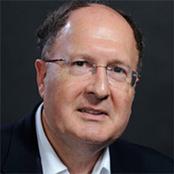 Professor Sir Gregory Winter became Master of Trinity College on 2nd October 2012. He is the former Deputy Director of the MRC Laboratory of Molecular Biology at Cambridge, and is best known for his research and inventions relating to humanised and human therapeutic antibodies. He pioneered techniques that have led to antibody therapies for cancer, and diseases such as rheumatoid arthritis and multiple sclerosis.

Sir Gregory is a graduate of Trinity College. His research career was based almost entirely in Cambridge at the Medical Research Council’s Laboratory of Molecular Biology and the Centre for Protein Engineering, and during this time he also founded three Cambridge biotech companies based on his inventions: Cambridge Antibody Technology (acquired by AstraZeneca), Domantis (acquired by GlaxoSmithKline) and Bicycle Therapeutics. Sir Gregory is a non-executive Director of Bicycle Therapeutics, and a Trustee of the Newton Trust, the Cambridge Commonwealth Trust, the Cambridge Overseas Trust and the Kennedy Trust for Rheumatology Research.

He was appointed CBE in 1997, and was then knighted in 2004. In 2013 he received the MRC Millennium Medal. In October 2018 he was jointly awarded the Nobel Prize in Chemistry, along with Frances Arnold and George Smith, for his pioneering work in using phage display for the directed evolution of antibodies, with the aim of producing new pharmaceuticals.