Shadow Secretary of State for Work and Pensions at Shadow Cabinet 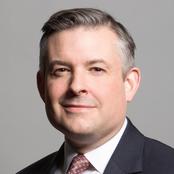 Shadow Secretary of State for Work and Pensions; MP for Leicester South

Jonathan Ashworth has been the Labour MP for Leicester South since 2011. He was appointed Shadow Secretary of State for Work and Pensions in 2021, after serving as Secretary of State for Health and Social Care since 2016. Before being elected as an MP, Jonathan worked as an adviser to Gordon Brown while he was Chancellor of the Exchequer and then Prime Minister, and then as head of party relations for Ed Miliband while he was Leader of the Labour Party. Jonathan studied politics and philosophy at Durham University and economics at Birkbeck College.

Jonathan is one of the elected politicians taking up a Policy Fellowship in 2021. He plans to use his Fellowship to develop his knowledge and understanding of developments in medical science and health care policy; and to understand better the future of life sciences, their contribution to the economy and their potential for the future. He is also interested in tackling health inequities, the links between climate change and pandemic risk and the future of health and social care after the pandemic.