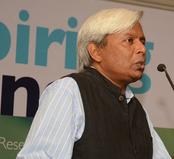 Professor VijayRaghavan has served as the Secretary to the Department of Biotechnology, Government of India. Prior to that, he was the Director of the National Centre for Biological Sciences (NCBS) of the Tata Institute of Fundamental Research (TIFR) and the interim head of the Institute of Stem Cell Biology and Regenerative Medicine (inStem).

Vijay Raghavan’s contributions in science, as developmental biologist, have been recognised widely. He was conferred an honorary Doctor of Science degree by the University of Edinburgh in 2011. He is a J C Bose Fellow of the Department of Science and Technology. He gave the J C Bose Memorial Lecture at the Royal Society in 2010, was awarded the inaugural Infosys Prize in Life Sciences 2009, and the Shanti Swarup Bhatnagar Prize, India’s most prestigious science award, in 1998.

He is a Distinguished Alumnus of the Indian Institute of Technology, Kanpur, the prestigious Institute’s highest honour. He was awarded the ‘Padma-Shri’ in 2013 by the Government of India He is a fellow of The Indian Science Academies. . VijayRaghavan is a Fellow of the Royal Society and a Foreign Associate of the US National Academy of Sciences.