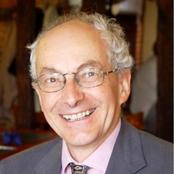 Professor Martin Hyland is Professor in Mathematical Logic in the Department of Pure Mathematics and Mathematical Sciences at the University of Cambridge. He is the former Head of Department.