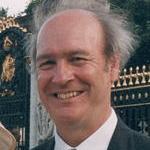 Professor Michael Thompson is an Honorary Fellow in the Department of Applied Mathematics and Theoretical Physics at the University of Cambridge. He is also Emeritus Professor of Nonlinear Dynamics in the Department of Civil, Environmental & Geomatic Engineering at University College London. He is active in promoting a greater understanding of science and mathematics among the general public.

While a post-doctoral research fellow at Peterhouse, Cambridge, he spent a year as a Fulbright visitor in the Department of Aeronautics and Astronautics at in . Joining University College London in 1964, he was appointed a Professor in 1977, and subsequently Director of the Centre for Nonlinear Dynamics in 1991. Based on his research into elastic buckling phenomena, he published three books on instabilities, bifurcations and catastrophes.

He was elected Fellow of the Royal Society in 1985. In 2004 Michael was awarded a Gold Medal by the and its Applications (IMA) at their 40th Anniversary Meeting for his lifetime contributions to mathematics. In April 2006, Michael was appointed, part–time, as a distinguished Sixth Century Professor in Theoretical and Applied Dynamics at the .