Minister of Economy and Enterprise at Spanish Government 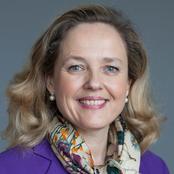 Former Director-General in the Directorate-General for Budget, European Commission

Nadia Calviño has served as Second Deputy Prime Minister of Spain since 2021 and as Minister of Economy since 2018. Previously, she was Director-General in the Directorate-General for Budget of the European Commission, holding this position at the top of the Commission's department dealing with the EU's financial programming, annual budgets, accounting and financial rules from 2014 to 2018. She oversaw the activities of five directorates and almost 450 staff.

Before moving to Brussels, Ms Calviño worked as a civil servant in Spain, mainly at the Ministry of Economy. She is an economist and a lawyer by training.