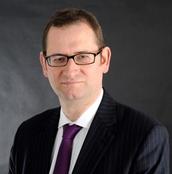 Paul has been a Director General at the Department for Education since February 2017. He is currently the Director General for Skills Group. He has responsibilities for further education, higher education, the wider adult-skills system, the post-16 education and training system in England. Paul is also Head of the Policy Profession and chairs the DfE Digital, Data and Technology Committee.

He is responsible for higher and further education strategy and policy, apprenticeships, T Levels, student finance, further education provision, the adult education budget and 16 to 19 funding, workforce development, analysis and data, including the exploitation of big data for further and higher education, and the Unit for Future Skills.

Paul was previously Director General for Higher and Further Education and Director General for Education Standards, having joined DfE as Director for Teachers and Teaching. Before joining the Department for Education, Paul was Director for Army Reform at the Ministry of Defence. A member of the British Army’s Executive Committee and reporting to the Chief of the General Staff, he was responsible for delivering a number of cross-cutting projects, including the Army Command Review and reforms of the Army Reserve. Prior to that, Paul spent three years as Director, Justice Reform at the Ministry of Justice, where he was responsible for developing cross-Criminal Justice System strategy and policy. In 2012, Paul also served as the co-chair of the G20 Anti-Corruption Working Group.

Before joining the Ministry of Justice, Paul was Programme Director for the Independent Parliamentary Standards Authority and prior to that, Head of Secretariat at the Commission on Scottish Devolution. Amongst other roles earlier in his career, Paul was the Deputy Principal Private Secretary to the Lord Chancellor and Secretary of State for Justice. Paul joined the Civil Service on the Faststream programme.

Paul has a BSc in Physics from the University of Leicester and an MPhil in the Science and Engineering of Materials from the University of Birmingham. Paul is a graduate of both the Major Projects Leadership Academy (MPLA) and the Orchestrating Major Projects Programme, at Saïd Business School, Oxford University. Paul is a trustee of the national education charity SkillForce, home to The Prince William Award.