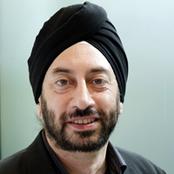 VP and Managing Director of Samsung Cambridge and Samsung Aalborg

Raj Gawera is VP and Managing Director of Samsung Cambridge and Samsung Aalborg and Cambridge Wireless Chairman. Raj has over 20 years of experience in short range and wireless communications technology R&D, business development and marketing. Raj was part of initial IEEE 802.11 team to define first WLAN standard in 1996 – a technology which has now shipped over 5bn units. Raj also helped pioneer the first 3G data transmissions working with Motorola and others to demonstrate one of the first video calls at the 3GSM show in 1998 – many years before 3G licences were awarded. He has also been awarded a number of patents including short range wireless technologies.

Raj was a founder member of start-up UbiNetics (1999), which successfully exited in 2005 for over $120m USD. As part of that deal, Raj joined CSR and ultimately took the role of VP Marketing where he was part of the team that acquired SiRF Technologies for $136m (2009) to add GPS technology to CSR portfolio. More recently in 2012, he helped sell CSR’s handset business to Samsung in a deal worth $310m for 310 staff to form the SCSC division. As part of that deal, Raj took up the role of VP Marketing responsible for defining future wireless products. In 2014, Raj was promoted to head up the SCSC division leading the silicon and software development for Samsung’s connectivity solutions.