Al Kindi Chair at Department of Genetics, University of Cambridge 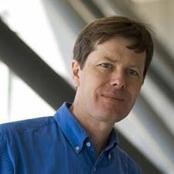 Dr Richard Durbin was appointed the Al Kindi Professor at the Department of Genetics in October 2017. Previously, he was the Acting Head of the Human Genetics unit at the Wellcome Trust Sanger Institute. He is known for developing numerous methods of sequence analysis, including: GeneWise, HMMER, Pfam, Ensembl &TreeFam. He now works in human genome resequencing, focussing on the analysis of genetic variation, and is involved in the 1000 Genome Project.

Apart from human genome resequencing, projects that Richard is connected to include the SGRP yeast sequence variation and population genomics project, the TreeFam database of animal gene families, the Ensembl resource for vertebrate genome annotation, the WormBase model organism database for C. elegans, the MitoCheck study of mitosis regulation in human cells, the Pfam database of protein domain families, and the ACEDB genome database.

Richard studied Maths at the University of Cambridge, and then completed a PhD at Cambridge's Laboratory of Molecular Biology.