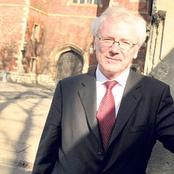 Sir Richard Clive Mottram, GCB is chairman or board member of a number of private and public sector organisations. He is chairman of the board of Amey PLC, and a member of the International Advisory Board of GardaWorld. He is a Visiting Professor at the London School of Economics and Political Science.

He was formerly a British civil servant, who retired in 2007 from his most recent senior post as Permanent Secretary, Intelligence, Security and Resilience in the Cabinet Office.

He also acted as Deputy Chair of the Civil Contingencies Committee, supporting the Prime Minister, Home Secretary and other Ministers in their role as Chair and, in the event of any serious incident requiring central government coordination, acting as the Government's senior Crisis Manager. He was also responsible for co-ordination of the Government's counter-terrorism policy and programmes.

Sir Richard retired from the Civil Service in November 2007 when the responsibilities he held were reorganised into two posts, with the Cabinet Secretary taking on the Accounting Officer role for the Intelligence Agencies.