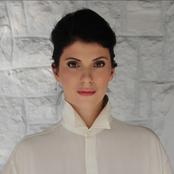 Šejla Kamerić was born in Sarajevo, Bosnia and Herzegovina. She has received widespread acclaim for her poignant intimacy and social commentary. Based on her own experiences, memories and dreams, which were influenced by the war in Bosnia and Herzegovina (1992-1995), Kamerić’s work takes us to spaces of displacement and discrimination. The weight of her themes stands in powerful contrast to her individual aesthetics and to her choice of delicate materials.

Her new ambitious work Ab uno disce omnes, commissioned by Wellcome Collection as part of the exhibition Forensics: The anatomy of crime, is shown in London until June 2015 and as an ongoing Open server database web project at http://abunodisceomnes.wellcomecollection.org