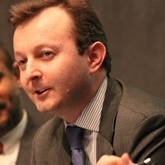 Seth Thomas is an advisor in the Bank of England’s policy & strategy division. He specialises in international financial stability – important to an open economy such at the UK’s – and the Bank’s interaction with the relevant international institutions such as the Financial Stability Board (G20), the Bank for International Settlements, and the IMF.

Before joining the Bank, he advised the Welsh Government on the feasibility of founding a public development bank, and also on its industrial policy related to Financial & Professional Services. This built upon nearly two decades of experience in international banking and strategy consultancy, most recently in Citi’s Public Sector Group as head of global content, while also covering work with the UK government. He has additionally held positions in financial institutions coverage, mergers & acquisitions, and strategy & analysis.

During the financial crisis Seth was partly seconded to the secretariat of a joint HM Treasury-City of London review of UK international financial services. His research project relates to the avoidance of another financial crisis through augmented leading indicators of systemic stress. It explores alternative measurements which could measure or predict international financial instability – distinct from conventional economic and financial gauges – and the appropriate mechanisms to collect and analyse this data.

Seth holds a law degree, and an M.Phil in International Relations from Trinity Hall, Cambridge. More recently, he graduated in public policy from Oxford University’s new Blavatnik School of Government as one of the first cohort to study the MPP. He has held several charity non-executive level roles, including six years on the governing council of Chatham House.