The Herchel Smith Professor of Medicinal Chemistry at Department of Chemistry, University of Cambridge 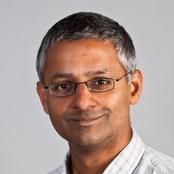 Nucleic acids are fundamental to life. Professor Sir Shankar Balasubramanian’s research is focused on the chemical biology of nucleic acids, and employs the principles of chemistry and the molecular sciences to address questions of importance in biology and medicine. His group’s projects are inherently interdisciplinary which provides scope for a diversity of intellectual and experimental approaches that they use, including organic synthesis, biophysics, molecular and cellular biology and genomics.

One of Professor Balasubramanian’s major research interests is to elucidate and manipulate mechanisms that control the expression of genes (either transcription, or translation). He is particularly interested in the role of non-canonical nucleic acid structures that control gene expression.

His group’s goal is to design and synthesise small organic molecules that target such structures and alter the expression of certain genes of interest. These small molecule gene regulators are valuable tools to study mechanisms in biology and will also open up new approaches for therapeutics and molecular medicine, particularly for diseases characterized by aberrant expression of certain genes such as various cancers.

This fundamental research inevitably creates opportunities for translation and commercialisation, such as Solexa sequencing, a new DNA sequencing technology that is used routinely for applications in genomics, including human genome sequencing.

Prior to his current role, Professor Balasubramanian was a Reader and later a Professor in Chemical Biology at the University of Cambridge. He was elected as a Fellow of the Academy of Medical Sciences in 2011 and knighted in the 2017 New Year's Honours List in recognition of his work as a co-inventor of Next Generation DNA sequencing, described as the most transformational advance in biology and medicine for decades.