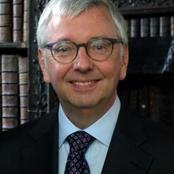 On 2 October 2017 Professor Stephen J Toope became the 346th Vice-Chancellor of the University of Cambridge.

Professor Toope joined Cambridge after a distinguished career as a scholar and academic leader. He was Director of the University of Toronto’s Munk School of Global Affairs (2015-2017), and before that President and Vice-Chancellor of the University of British Columbia (2006-2014). He served as President of the Pierre Elliott Trudeau Foundation (2002-2006), and as Dean of Law at McGill University (1994-1999).

From 1986 to 1987 he served as Law Clerk to the Rt Hon Brian Dickson, Chief Justice of Canada. In 1991, he was Research Director at the Office of the Special Representative concerning the Royal Commission on Aboriginal People (1991).

Professor Toope subsequently worked as a consultant to Canada’s Department of Foreign Affairs and International Trade, the Canadian International Development Agency, and a number of United Nations’ agencies. In 1994 he was a delegate on the UN’s observer mission to the first post-apartheid South African General Election. Between 2004 and 2007 he was Chair and Rapporteur of the UN’s Working Group on Enforced and Involuntary Disappearances.

In 2005 he served as a fact-finder for the Commission of Inquiry into the Actions of Canadian Government Officials in relation to Maher Arar, a Canadian subjected to rendition from the USA to Syria.

He was Chair of the Board of Universities Canada, and President of Canada’s Federation for the Humanities and Social Sciences. He is a past Director of the Public Policy Forum, of the Canadian Institute for Advanced Research, and of the Royal Conservatory of Music – from which he received an Honorary Fellowship.

Among the distinctions he has received are the Queen Elizabeth II Silver Jubilee Medal (2012), the United Way of Canada President’s Award of Distinction (2014), various honorary degrees, and the John Read Medal of the Canadian Council of International Law (2015). In recognition of his service and accomplishments, in 2015 he was inducted as an Officer of the Order of Canada – one of Canada’s highest honours.

Stephen Toope is married to speech therapist and musical theatre composer Paula Rosen. They live in Cambridge and have three adult children.