Professor of Physics and Molecular & Cellular Physiology at University of Stanford 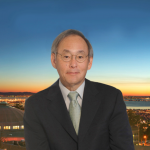 Steven Chu is the William R. Kenan, Jr. Professor of Humanities & Sciences and Professor of Molecular and Cellular Physiology at Stanford University. From January 2009 until April, 2013, Professor Chu served as the 12th U.S. Secretary of Energy under President Barack Obama. During his tenure, the Department of Energy annual budget was approximately $26 Billion and was entrusted an additional $36 B through the Recovery Act.

As the longest serving Energy Secretary, he began several initiatives including ARPA-E (Advanced Research Projects Agency – Energy), the Energy Innovation Hubs, and the Clean Energy Ministerial meetings. During his time at the DOE, the deployment of renewable energy in the U.S. doubled. As the first scientist to head the DOE, Dr. Chu helped identify and recruit a dozen outstanding scientists and engineers; he worked to create a “Bell Labs” culture in ARPA-E, which is now being disseminated in other parts of the Energy Department such as the solar photovoltaic program, “SunShot.”

From 2004-2009, he was the Director of the Lawrence Berkeley National Laboratory and Professor of Physics and Professor of Molecular and Cell Biology at the University of California Berkeley. Prior to those positions, he was the Theodore and Francis Geballe Professor of Physics and Applied Physics at Stanford University. During this time at Stanford (1987 – 2004) he twice chaired the Department of Physics and helped start Bio-X, a multi-disciplinary initiative that brings together the physical and biological sciences with engineering and medicine. From 1978 – 1987, he worked at AT&T Bell Laboratories, including four years as Head of the Quantum Electronics Research Department.

Chu’s thesis and postdoctoral work was one of the first successful observations of parity non-conservation in atomic transitions, confirming the Weinberg-Salam-Glashow theory that unified weak and electromagnetic interactions. While at Bell Laboratories Chu and A. Mills performed the first laser spectroscopy of positronium, the fundamental atom consisting of an electron and the positron, and muonium, an atom consisting of a proton and muon. While also at Bell Labs, Chu also made contributions in condensed matter studies of exciton energy transfer, Anderson Localization, and made the first observation of anomalous (faster than light and negative velocity) pulse propagation.

While at Bell labs, Chu led the group that showed how to first cool and then trap atoms with light. The “optical tweezers” trap, first demonstrated during the course of the atom trapping work, is widely used in biology. Other contributions include the demonstration of the magneto-optic trap, the most widely used atom trap today. At Stanford, he developed the theory of laser cooling of actual, multilevel atoms (also independently by Claude Cohen-Tannoudji and Jean Dalibard), and demonstrated the first atomic fountain/fountain atomic clock. For this work, he was the co-recipient the Nobel Prize in Physics in 1997. He group also introduced atom interferometry based on optical pulses of light, a technique that has remained the most precise form of atom interferometry after two decades. Chu and his colleagues used atom interferometry test the equivalence principle between a macroscopic object and a quantum object to an accuracy of several parts per billion and in the precision measurement of the coupling constant that defines the strength of electromagnetic interactions.

Using the optical tweezers, Chu introduced methods to simultaneously visualize and manipulate single bio-molecules. This work led to investigations in polymer dynamics (using DNA as the model polymer) that included studies of reputation and relaxation in polymer solutions, the discovery of “molecular individualism”, and the observation of hysteresis in the coil-stretch transition.

In single molecule biology, Chu, with James Spudich and Robert Simmons, designed and developed an apparatus that was able to measure the force on an actin filament held by optical tweezers when myosin molecular motors attached to the actin hydrolyzed ATP. Chu and his group were the first group to use FRET (Fluorescence Resonance Energy Transfer) to study the individual molecules tethered to a glass surface.

This advance allowed the Chu and his collaborators to perform the first single molecule studies of the unfolding and multiple pathways of the refolding of the Tetrahymena, the accommodation and proofreading mechanism of the ribosome, and studies of the enzymology of the hairpin ribozyme and helicase enzymes. During this time Chu helped start Bio-X at Stanford University, a multi-disciplinary program that combined the physical and biological sciences with medicine and engineering.

More recent single molecule studies the role of SNARE and associated proteins responsible for neural vesicle fusion and the demonstration of the assembly of the pre-initiation complex and followed by eukaryotic transcription. His group has also been applying sub-wavelength optical imaging to studies of cancer signaling, the structural development of growing bio-films, while improving the spatial resolution to sub-nanometer resolution by developing a method to measure and correct the non-uniform response of light in CCD cameras.

During the past ten years, Chu has also become active in marshaling scientists and resources to address the energy problem with new pathways to sustainable, CO2 neutral energy. He co-chaired the Inter-Academy Council report “Transitioning to Sustainable Energy.” He was a member of the NAS/NAE/NRC committees that produced the reports, “Rising Above the Gathering Storm” and “America’s Energy Future.” The “Rising Above the Gathering Storm” report recommended the establishment of a new funding agency within the Department of Energy, ARPA-E (Advanced Research Projects Agency – Energy) that would focus on high-risk high reward energy research that could result in the invention of disruptive technologies.

Chu led the Lawrence Berkeley National Laboratory (LBNL) from August 2004 to January 2009. He stepped down to become the 12th U.S. Secretary of Energy until April 2013. As the fist scientist to hold a cabinet position and the longest serving Energy Secretary, he began several initiatives including ARPA-E (Advanced Research Projects Agency – Energy), the Energy Innovation Hubs, and the Clean Energy Ministerial meetings. Also during his tenure, the deployment of renewable energy doubled in the U.S. and solar energy deployment increased 10-fold. Chu was personally involved in recruiting numerous outstanding scientists and engineers into the DOE, creating a more Bell-labs like culture in how the Department evaluates and awards proposals. With colleagues from LBNL, he developed an improved methodology for setting federal appliances standards. Chu was personally tasked by President Obama to assist BP in stopping the Deepwater Horizon oil leak in the Gulf of Mexico and to assist the Government of Japan with the tsunami-damaged nuclear reactors at Fukushima-Daiichi.

After his government service, Chu has returned to Stanford to become Professor of Physics and Professor of Molecular and Cellular Physiology, where he will teach and continue his research in biophysics, biomedicine, energy and energy economics.