PhD Researcher at Centre of Development Studies, University of Cambridge 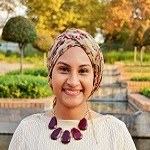 Taskeen is a South African Cambridge-Africa PhD student, researching the role of African Massive Open Online Courses in supporting the most marginalised to improve their capabilities.

Taskeen wishes to dedicate her life to creating a social change; striving for a world without famine and poverty, a world of justice and equality and a world with good education for all. She studied for a BSc Honours Degree in Electrical Engineering at the University of Witwatersrand and was the Chairperson of the School Council of Electrical Engineers and Vice-President of Muslim Students’ Association of South Africa. Taskeen pioneered an initiative called ‘Solar Powered Learning’, which essentially allows learners in rural communities to have access to technology in a low cost and environmentally friendly way. Additionally, Taskeen was part of the executive of Engineers Without Borders South Africa, which focuses on Human Centred Design. Taskeen was chosen as one of the Mail and Guardian Top 200 Young South Africans for 2014, for her contributions to civil society. She completed her MPhil in Engineering for Sustainable Development at the University of Cambridge in 2015, focusing on Educational Technologies in Rwanda.