Member of the High-Level Steering Group at Education Outcomes Fund 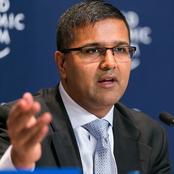 Vikas Pota became a CSaP Policy Leaders Fellow during his tenure as Chief Executive and then Chairman of the Varkey Foundation, a family foundation seeking to uplift the status of teachers as a way of improving student outcomes in schools. As its first Chief Executive, Vikas established the Global Teacher Prize, convened the Global Education & Skills Forum, and established a dialogue with key stakeholders through the publication of research, amongst a portfolio of programming commitments in Africa and Latin America. He left the Foundation at the end of 2019.

Vikas is a Visiting Practitioner in Education at Harvard University, an Honorary Lecturer at UCL Institute of Education, Fellow of the Royal Society of Arts, Manufactures and Commerce, and was selected by the World Economic Forum as a Young Global Leader for his work in education. Vikas received an Honorary Doctorate in 2016 and was listed by London’s Evening Standard newspaper as being in the Progress 1000 list of most influential Londoners in 2016. Investment bank UBS, in 2018, appointed him to their Global Visionaries programme.