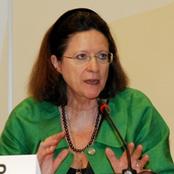 Virginia was appointed as Consultant in Global Disaster Risk Reduction for Public Health England in April 2014. This appointment is to take forward her work as vice-chair of the UN International Strategy for Disaster Reduction (ISDR) Scientific and Technical Advisory Group and as the Chair of the Science & Technology Organising Committee for the UNISDR Science and Technology Conference on the implementation of the Sendai Framework for Disaster Risk Reduction 2015-2030 January 27-29 2016

On 1 January 2011, she was appointed as Head of HPA’s Extreme Events and Health Protection section (since April 1 2013 this was transferred to Public Health England). She is taking forward work on evidence base information and advice on flooding, heat, cold, volcanic ash, and other extreme weather and natural hazards events.

In addition, Virginia has been a Coordinating Lead Author for the Intergovernmental Panel on Climate Change Special Report on Managing the Risks of Extreme Events and Disasters to Advance Climate Change Adaptation, published in March 2012. She has been the UK Government member on the UN International Strategy for Disaster Scientific and Technical Advisory Group since 2008 and she is also a member of the Hyogo Framework for Action Mid Term Review Advisory Group, representing science, for the UN ISDR since 2010 and this role is likely to be ongoing to 2015.