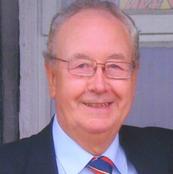 Sir William was the Government's Chief Scientific Adviser from 1990 to 1995.

A microbiologist by training, his research area was environmental microbiology and biological nitrogen fixation. He was founding Chair of Biological Sciences at the University of Dundee from 1968-1988, Chief Executive of the Agricultural and Food Research Council 1988-1990 and President of the Royal Society of Edinburgh 1999-2002

He chaired the Independent Advisory Group on the Decontamination of Gruinard Island of Anthrax, was Chairman of the Microbiological Research Authority Porton Down and of the National Radiological Protection Board. Served on the Scientific Advisory Boards of SmithKline Beecham and Glaxo SmithKline, was Chairman of Cyclacel plc and President of the BioIndustry Association.

His other commitments included President of the British Association for the Advancement of Science, member of the Royal Commission on Environmental Pollution, a vice President of the Royal Society, Chairman of the Independent Advisory Group on Mobile Phones and Health, Chairman of the Health Protection Agency and of Tayside Universities Hospitals Trust. He has 24 honorary degrees and fellowships and lists his Club as Dundee United.