The GCSA at 50: reflections on the past, present and future of scientific advice

To mark the fifty year anniversary of Solly Zuckerman’s appointment as the first Government Chief Scientific Adviser, CSaP came together with the Royal Society, GO-Science and SPRU to host an event on the past, present and future of scientific advice.

You can listen to a full recording of the event here:

The event took the form of two panel sessions, the first being retrospective, focusing on the formation and evolution of the role of GCSA, and the second prospective, looking at how the role is changing and where it might go from here. Sir John Beddington (GCSA 2008-2013) welcomed the audience and introduced the event, sharing thoughts on his experience of the job.

“Those he advises have absolutely no way of assessing what he is telling them...” Lisa Jardine on the fundamental problem of the CSA. 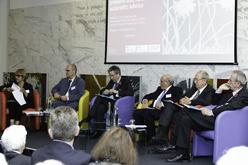 The first panel session was kicked off by Lisa Jardine challenging the very premise of the event, arguing that the role of GCSA existed (in all but name) considerably before 1964. Jon Agar then covered the formation of the role with Solly Zuckerman and tracked how the role changed during the times of his 3 successors. To read Jon’s thoughts on the day see his blog here.

Sir Robin Nicholson prefaced his remarks by saying what a privilege it was to serve the first Prime Minister who had scientific training, and he regaled the audience with anecdotes about his time as GCSA. Sir William Stewart, successor to Sir Robin as GCSA, then described his different experiences working for two Prime Ministers. Lord Wilson, former Cabinet Secretary, was the final speaker on this panel, and after sharing his reflections on working closely with CSAs enumerated some of the key traits that make an effective GCSA: they must be able to communicate with clarity to non-scientists; they must know how to contribute to policy, and nowadays they must be able to explain to the public.

“Science frames the stage for political decision making. It must provide the evidence, not the answer” Lord May on the role of scientific advice within government

Following each of the panel sessions there were a number of questions from the audience covering a range of topics, including the different types of expertise, international co-operation between science advisers, and the importance of independence.