The emerging landscape of 'big data' proposes to transform the policy-making process. The massive amounts of data captured through sensors and electronic devices pose fundamental questions as to how data is collected, how it is processed, how it is analysed, and how it should inform the policy-making process. All this must be balanced by an appreciation of privacy and security concerns, an legal area which is itself in a state of development.

The inaugural Data for Policy conference was held in Cambridge 15 to 17 June 2015 to address these issues. The conference was convened by Dr Zeynep Engin of the London Centre for Social Studies and Professor Jon Crowcroft of the University of Cambridge in collaboration with an interdisciplinary committee that represent key UK-based institutions specialising in Big Data research. CSaP was involved as a supporting organisation, with Executive Director Dr Robert Doubleday and Research Associate Dr Moira Faul sitting on the interdisciplinary committee.

"Our unprecedented ability to collect, store and analyse data is opening up new possibilities from monitoring infrastructure to understanding individuals' life pathways"

CSaP launched its policy challenges briefing on Data Science, produced with Cambridge Big Data and phgfoundation, on the second day of the conference. 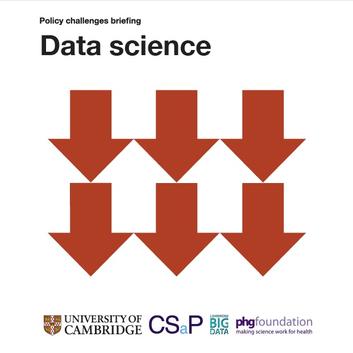 The briefing, in its succinct articles by renowned experts, seeks to provide a strong sense of the opportunities and potential pitfalls of big data use for non-specialist audiences, while also brokering an exchange between government policy-makers, industry leaders and academics from across disciplines.

The first keynote of the day, 'Big data: promise and pitfalls', came from Professor David J. Hand of Imperial College London. Professor Hand's keynote provided a strong foundation for the day, laying out clearly the nature of big data, it's sources, the speed of its collection, its scale, its diversity, and its qualilty. Professor Hand took particular care to note the speed of change and the juvenile state of understanding of big data. Particular emphasis was laid upon the issue of uncertainty, challenging the lazy assumption that 'big data' means 'small uncertainty'.

The conference split then into three parallel sessions, each addressing the application of big data to policy-making. The 'Healthcare applications' session was organsied by the London Innovation Society. Mike Standing of Deloitte, in his presentation 'Transforming healthcare data through analytics', detailed how big data could be used to understand patients' pathways through the healthcare system, enabling administrators to better deploy resources, customise services, change the behaviour of medical professionals, empower patients and reduce clinical pathway variance. Joanna Chataway of RAND Europe spoke of 'real world data', data that are not collected in conventional randomised controlled trials, while Chris Rands of the phgfoundation demonstrated how data sharing could be used to control outbreaks by exposing the mechanisms by which viruses are transferred from person to person. 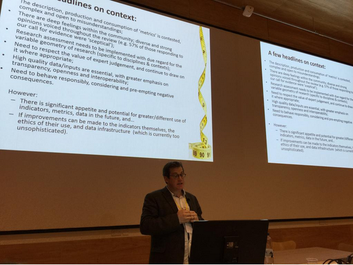 The conference was brought back together for a keynote from Professor James Wilsdon of Science & Technology Policy Reseach. Professor Wilsdon spoke of the recent Research Excellence Framework exercise, by which the quality of academic research across UK higher education institutions was assessed. The keynote emphasised that, while big data metrics have their place, there is a greater need for disciplinary adaptation of the system and for increased qualitative assessment.

A session with policy-makers from the Cabinet Office, Government Digital Service, and Office for National Statistics followed. Across the various presentations, speakers were keen to emphasise that the civil service had begun experimenting with the use of the big data. Sue Bateman, Head of Data Science at the Cabinet Office, described several means by which teams involved with big data were seeking to shift Civil Service culture and spread understanding it power and methods.

"The conversation between science and policy will be helped by encouraging the 'customers', those hearing a speech or buying a product, to ask questions. Hold the people making the claim to account."

For the final session of the day, the conference split again into parallel sessions. Sense about Science organised a panel on 'Testing Big Data'. Professor Hand of Imperial College London, Phil Bradburn of the National Audit Office, and Prateek Buch from Sense about Science each spoke of not only the application of big data, but the difficulties expressing and encouraging public understanding of the margins of uncertainty in the results of analysis. Big data is powerful, but its limitations must be understood if the products of research and analysis are not to be misunderstood or abused.

Earlier this month CSaP Policy Fellow, Richard Sargeant, hosted a meeting at the Government Digital Service (GDS) which was set up to revolutionise the way ...

CSaP's latest Policy Challenge briefing was launched at a major conference in Cambridge this week which brought together researchers, policy makers and industry practitioners to ...

How can we measure social cohesion?

At a meeting on cohesive societies, the University of Oxford's Anthony Heath led a conversation on measuring social cohesion alongside Ed Humpherson, Director General of ...