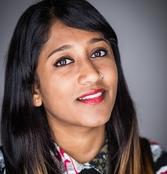 Abi Ramanan is Co-Founder and CEO of food-technology company ImpactVision. ImpactVision interpret hyperspectral images (a combination of spectroscopy and digital imaging), providing information about food quality attributes, that we cannot see with our eyes alone. ImpactVision aims to give food producers and retailers information in a non-invasive and rapid way, facilitating superior decision-making, optimising food chain processes and preventing food waste across the globe.

Abi has extensive experience of working in campaigns and communications in the NGO sector, and she has founded two food social businesses in London. She is Co-Founder of social enterprise DayOld, which receives surplus baked goods food from artisan bakeries at the end of the day, and resells at pop-ups around London, with money raised donated to child hunger charities. She is the Founder of Papi's Pickles, which employs women who have emigrated to Britain from Sri Lanka following the civil war. By working for Papi's Pickles these women can earn a living, improve their English language skills, while working in a supportive environment.

Abi has previously worked in the third sector for charities and NGOs including Stamp Out Poverty, the British Institute of Human Rights, and the Fairtrade Foundation. In 2016 she was named as one of Nesta's "2016 50 New Radicals", a list of people and organisations who are creating a positive impact in society, she is a TEDx speaker, a World Economic Forum Global Shaper, and a graduate of Singularity University.