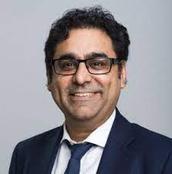 Akshay is responsible for the economic regulation of Great Britain’s energy networks. This includes the development of the next generation of onshore network price controls called RIIO2, the regulation of offshore transmission infrastructure, and the delivery of an ambitious cross-border interconnection programme through the cap and floor regime.

Prior to joining Ofgem, Akshay was on secondment from HM Treasury to Transport for London, where he led TfL’s work on funding transport infrastructure in London by capturing the uplift in land and property values associated with transport projects such as Barking Riverside Extension, Crossrail 2 and the Bakerloo Line Extension.

This followed a spell of five years at HM Treasury, where Akshay directed energy and transport projects for Infrastructure UK. He has been involved in the design and delivery of electricity market reform, the competition for carbon capture and storage, the development of the new nuclear energy programme, the reform of the strategic roads network and regeneration projects such as the Northern Line extension to Battersea Power Station in London.

Akshay studied economics, finance, management, and bioscience, at the London School of Economics, the universities of London and Delhi, and the Indian Institute of Management.