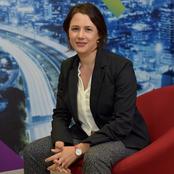 Naomi Krieger-Carmy took up the post of Head Of Societal Challenges Division at the Israel Innovation Authority in 2017, having perviously served for five years as the Director of the UK Israel Tech Hub, an initiative based at the British Embassy Israel, which aims to drive economic growth and innovation in the UK and in Israel by building partnerships in technology between companies, entrepreneurs and investors in both countries.

Naomi began her career as an Assistant Economist at the Bank of Israel research department, and then spent several years as an investment banker on Wall Street, working with Israeli and global technology companies looking to access capital markets or to conduct mergers and acquisitions.

After a brief stint at the New York City Economic Development Corporation, she returned to Israel to take the position of General Manager of STRIVE Israel, an innovative not-for-profit working to help "chronically unemployed" young people of diverse backgrounds develop financial independence and meaningful careers.

Naomi holds a BA in Economics and International Relations from Hebrew University of Jerusalem, where she was President of the Debating Society, and a Masters in Public Policy from the Kennedy School of Government at Harvard University, focusing on economic development and business-government relations.

To read about Naomi's experience as a Policy Fellow in Cambridge see here.