Lecturer, Signal Processing and Communications Lab at Department of Engineering, University of Cambridge 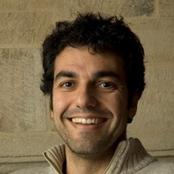 Albert Guillen i Fabregas was born in Barcelona, Catalunya, Spain, on November 27th, 1974. He received the Telecommunication Engineering Degree and the Electronics Engineering Degree from Universitat Politecnica de Catalunya, Barcelona, Catalunya, Spain, and the Politecnico di Torino, Torino, Italy, respectively, both in 1999, under the Double Degree Socrates-Erasmus Scholarship Program of the European Community, and the Ph.D. in Communication Systems from Ecole Polytechnique Federale de Lausanne (EPFL), Lausanne, Switzerland, in 2004. From August 1998 to March 1999, he conducted his Final Research Project at the Center for Communications and Signal Processing Research (CCSPR), at the New Jersey Institute of Technology (NJIT), Newark, NJ, supported with a Nokia-NJIT Research Fellowship. He was with Telecom Italia Research Laboratories, TILAB (old CSELT), Torino, Italy, from November 1999 to June 2000. From September 2000 to May 2001, he was with the European Space Research and Technology Centre (ESTEC), of the European Space Agency (ESA), Noordwijk, The Netherlands, developing a new class of high efficiency turbo coded modulations for next generation satellite digital video broadcasting. During his doctoral studies, from 2001 to 2004, he has been a Research and Teaching assistant at the Mobile Communications Department, Institut Eurecom, Sophia-Antipolis, France. From June 2003 to July 2004 he has been a visiting scholar at the Communications Theory Lab at EPFL. Since September 2004 he is at the Institute for Telecommunications Research, University of South Australia, Mawson Lakes, Australia, as a Research Fellow.

His specific research interests are in the area of communication theory, information theory, coding theory, digital modulation and signal processing techniques, particularly with wireless terrestial and satellite applications. Dr. Guillen i Fabregas received a pre-doctoral Research Fellowship of the Spanish Ministry of Education to join ESTEC-ESA. He received the Young Authors Award of the 2004 European Signal Processing Conference EUSIPCO 2004, Vienna, Austria for his paper "Impact of Signal Constellation Expansion on the Achievable Diversity in Quasistatic Muliple Antenna Channels" co-authored with Giuseppe Caire, and the 2004 Nokia Best Doctoral Thesis Award in Mobile Internet and 3rd Generation Mobile Solutions from the Spanish Institution of Telecommunications Engineers.