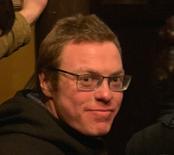 Alex joined CSaP in January 2019 as part of a three-month internship funded by EPSRC.

Alex is a final year PhD student studying Mathematics at the University of Warwick. His supervisor is Agelos Georgakopoulos. He specialises in Graph theory, the study of networks. In studying this Alex has taken particular interest in the symmetries of these networks focusing on vertex transitive graphs.

Prior to his PhD Alex also completed a MMath at the University of Warwick. His master’s thesis was on representations of higher dimensional categories, where one infers data about large complicated objects from maps to smaller simpler ones. Which he continues to study within his PhD.

Outside of Academia Alex enjoys finding out about behavioural science and machine learning specifically about their effects on the world today. As well as cycling, hiking and playing board games.