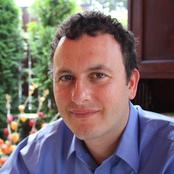 In June 2019, Matthew Gould took up the new post of Chief Executive Officer, NHSX (a joint unit between the Department for Health and Social Care and NHS England). As CEO, Matthew is responsible for setting the national technology agenda for healthcare, and overseeing digital transformation in the NHS, making sure patients and staff have the digital technology they need.

Previously, as DG for Digital and Media Policy in the Department for Digital, Culture, Media and Sport (DCMS), Matthew's mission was to equip the nation with the skills and technology it needs to create tomorrow’s world-leading digital businesses, and to make sure everyone can enjoy the benefits of modern technology.

In his previous role as British ambassador to Israel, Matthew set up the UK Israel tech hub, which laid the foundations for the UK and Israel’s powerful tech relationship. He was also the Government’s Director of Cyber Security at the Cabinet Office, focussed on keeping Britain safe from cyber attack.

He had previously served as Principal Private Secretary (Chief of Staff) to the Foreign Secretary (both David Miliband and William Hague). Before that he worked briefly as Private Secretary for Foreign Affairs for Tony Blair and then Gordon Brown in Downing Street. He was Robin Cook's speechwriter from 1997 to 1999.