Professor of Brain, Safety and Resilience at Leiden University 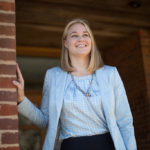 Anne-Laura van Harmelen is a professor Brain, Safety and Resilience at Leiden University. She’s currently involved with the research program Social Resilience and Security, an interdisciplinary program designed to contribute to greater social security for all. Anne-Laura van Harmelen's research focuses on a better understanding of the complex social, psychological and neurobiological mechanisms of risk and resilience in adolescence

One in three children and adolescents experiences childhood adversity, such as child abuse or bullying. Childhood adversity is one of the strongest predictors of many behavioral and mental problems in adolescence. To counter these problems, Anne-Laura van Harmelen's research focuses on a better understanding of the complex social, psychological and neurobiological mechanisms of risk and resilience in adolescence. For example, van Harmelen has shown that childhood adversity is related to changes in the structure and functioning of the brain, which make people vulnerable to mental problems and that the same neurobiological mechanisms make people vulnerable to suicide. She also showed that there are important factors that increase resilience in youth with childhood trauma experiences, such as friendships and support from the family, recall of positive memories and stronger regulation of stress responses in the brain. Her research has also shown that these factors strongly influence each other. These findings have led Van Harmelen to propose that resilience can best be described as a complex and dynamic system.

Dr van Harmelen was previously a Royal Society Dorothy Hodgkin Fellow and Senior Research Associate at the Department of Psychiatry, University of Cambridge and a Fellow at Lucy Cavendish College. Her research aims were to understand the differential mechanisms that link negative family environments where children may be emotionally abused and/or neglected (child emotional maltreatment; CEM) with later mental health disorders, or resilience from these disorders.